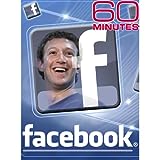 Airdate: 12/5/10  If Facebook, with its 500 million users (and growing!), were a nation, it would have the world’s third biggest population. At the head of this empire is Facebook’s creator and CEO Mark Zuckerberg, a multi-millionaire who still dresses in t-shirts, sits at a non-descript desk, and enjoys writing computer code. But Zuckerberg’ ambitions are not as modest as his wardrobe. Zuckerberg tells Lesley Stahl about the direction of the company as it expands into other areas of the Intern$ 17.95